Thoughts can be very habit forming. We go over them (or versions of them) again and again. Thoughts about work, home life, relationships past events and traumas. These thought habits are not healthy but we get stuck in them all the time.
And all thoughts come with emotions. Whenever we think, we feel. There’s no getting away from it. Try thinking about something. Anything you like. Your shoes, for example. Do you like them? Joy. Do they need cleaning? You might feel disgust at the state of them or annoyance at yet another job to do.
Thinking about the things in front of us is one thing, but habitual thoughts are usually about something else. Something not in the Here and Now, but in the There and Then. In Gestalt Therapy we call these repeated thought scripts ‘Fixed Gestalts’. The term can also apply to patterns of behaviour and interaction, but for now we’ll stay with our thoughts and how they affect us emotionally. 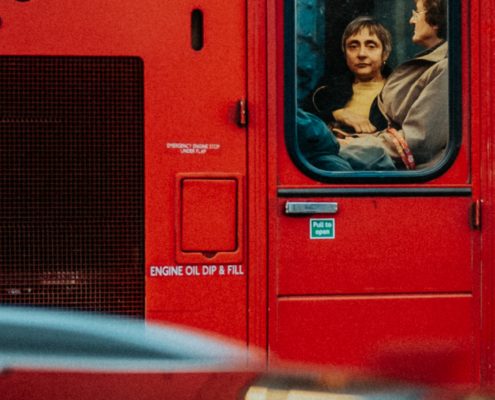 Picture this: You’re sitting on the bus, surrounded by strangers, but you’re not paying them any attention at all. Instead you are running a thought script and thinking about work. It’s an old one involving some conflict with your boss about deadlines or the quality of your work, but the storyline is based on something which happened today, an event at work which has triggered the memory. You’re sitting there, bombing along on the number 17, all hacked off and feeling stressed and angry. You are tense, your blood pressure is up, and it’s got nothing to do with where you are and what you’re doing right now. Nothing at all.

The emotions you are feeling are about your thoughts which are about something and somewhere else. You’ve brought the past into the present, jazzed it up, brooded on it and now you’re nuking yourself with fears and worries which have no place here and now on the back of the Number Seventeen bus. And the result? Not only are you all wound up but you’re also frustrated because you can’t do anything about it. How could you? You’re on the back of a bus, for heavens sake! So you feel upset and powerless and out of control. And then you take it all home with you and carry on.
I know I did. For years I struggled with terrible thought habits, vicious internal scripts which I played on a loop without even knowing I was doing it. And it made me ill, because that’s what these emotions do. For years they added to the pressure of an already difficult job, but in all that time I never realized how much damage I was doing to myself.

There are lots of emotions but the ones you need to be most aware of are the ones I call the 3A emotions – Anxiety, Anger and Anguish.
Anxiety is about fear. Whether it’s just a slight worry or absolute terror, the thing about anxiety is that it is almost invariably focussed on the future. Usually you’re worried that something bad is going to happen to you, and you cannot control or stop it.
Anger is about hurt. You have been attacked (physically or verbally) unjustly and you want retribution. Your boss has been mean, your ‘friend’ on Facebook has just trashed you, your partner is neglecting you.
Anguish is about the pain of loss. Grief. Sadness. Something has happened and it’s taken away something from you. You’ve lost someone special. A relationship has destroyed your self-esteem. Anguish is grief for the past, brought into the present.
These three accompany most of the things we think about and cause us the most trouble. Not just emotionally but physically, too. I’ll talk about the effects of cortisol and adrenaline later but for now just bear these three emotions in mind.
Every time we brood over past events, we bring back the emotions we felt at that time. Reminding ourselves not only of the bad things that happened but the terrible feelings too. That’s how this process works. Our thinking habit is aiming our attention onto the things that hurt us. So we can hurt ourselves some more.

Who is managing you right now?
Scroll to top

This site uses cookies. By continuing to browse the site, you are agreeing to our use of cookies.

We may request cookies to be set on your device. We use cookies to let us know when you visit our websites, how you interact with us, to enrich your user experience, and to customize your relationship with our website.

Click on the different category headings to find out more. You can also change some of your preferences. Note that blocking some types of cookies may impact your experience on our websites and the services we are able to offer.

These cookies are strictly necessary to provide you with services available through our website and to use some of its features.

Because these cookies are strictly necessary to deliver the website, you cannot refuse them without impacting how our site functions. You can block or delete them by changing your browser settings and force blocking all cookies on this website.

We also use different external services like Google Webfonts, Google Maps and external Video providers. Since these providers may collect personal data like your IP address we allow you to block them here. Please be aware that this might heavily reduce the functionality and appearance of our site. Changes will take effect once you reload the page.